The New York Times published an article on Sunday claiming that the Bush Administration will be disputing the findings of the Senate Intelligence Committee report (click here to download) condemning the use of torture by the CIA in the years immediately following 9/11.  This is particularly disappointing given that it's become increasingly clear that the United States did, in fact, engage in conduct that constitutes torture. 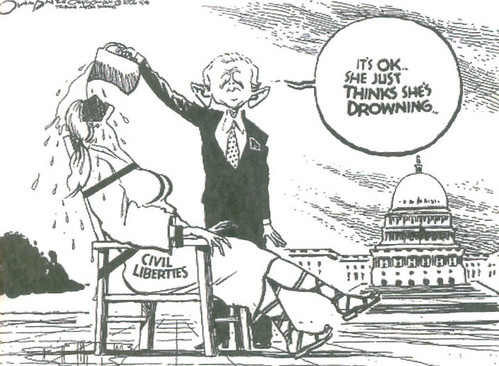 While many Americans are often quick to talk about American exceptionalism, the same individuals generally avoid honest discussions about what's transpired when our nation falls short of the high standards we claim to live by. The problem with such an imbalanced perspective is that a nation that can't admit it's faults can never outgrow such faults.

For this reason, it's critical that the Senate report be released so that Americans can come to terms with what our nation is responsible for and learn from our mistakes. Doing so is the only way we'll ever be able to legitimately reclaim our righteous role as a beacon of light to all the world.

Not only do we need to admit what we've done, but we need to hold those responsible accountable, and pass legislation designed to ensure we never fall beneath our own standards again. Consequently, if anyone in the Executive Branch or the CIA did break the law, they should be held accountable for their actions.  This is important because if the United States wants to remain respected on the world stage, we have to hold ourselves to the highest of ideals, or at the very least the ideals we've promised to live up to.  If we don't, and choose to turn a blind eye to the grossest wrongdoings of those individuals we elected to represent us, then we're all accessories after-the-fact to the immoral and illegal things that have been in America's name, if not full accomplices.

It's time that America comes clean with the world, and with ourselves. If we've done wrong, we need to admit it, and show the world how a civilized country takes responsibility for its actions, including holding our elected representatives responsible for the misdeeds done under their watch.

﻿Note: This post was originally published on AmericanMillennials.com on December 9, 2014.